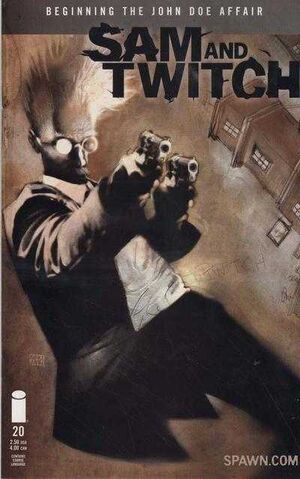 Months later in the Crimemobile, Sam Burke and Twitch Williams drive back to the station with Roberto the Pimp locked up in the backseat. Twitch tells Sam here just needed a few days away from work to think things through after the loss of his shirt time romance with KC McRory.

Upon returning to the Headquarters, Sam find a VHS tape addressed to him waiting at his desk. When they put it on, they see a man in a black Ski mask dominate a man and woman before killing them.

Sam takes the tape to Jimmy Murphy in AV to validate if the tape is real. Twitch and Sam discuss that it could involve the Feds if it is a serial killer case. Sam tries to make jokes but Twitch remains serious. Sam tells him to lighten up and that other officers have seen it as well. Twitch remains somber from his loss of KC.

A woman heads into a gas station. When she returns to her car, the Join Door killed attacks her from the back seat.

Later that night, Sam gets a call from Jimmy informing him that the tape is legit. He hangs up and heads to the fridge to get a drink only to realize he's out of beer. He heads to a local bar to get a drink. Upon returning, a man in a black man flees from his apartment. Sam finds yet another tape waiting for him at his apartment.

Retrieved from "https://imagecomics.fandom.com/wiki/Sam_and_Twitch_Vol_1_20?oldid=42775"
Community content is available under CC-BY-SA unless otherwise noted.