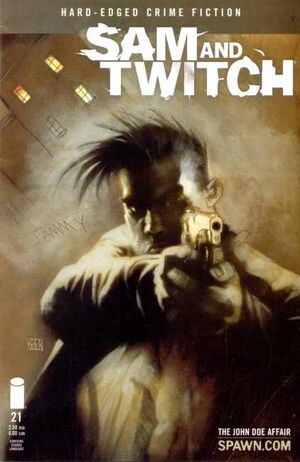 The NYPD investigate Sam Burke's apartment. They tell him the Chief's bosses are coming down on them to keep thinks quiet. Dean wonders how they could have heard about things so quickly unless there was a leak in the department. The police leave reporting the place was about spotless except a few clothes fibers. Twitch rebukes Sam for not calling him right away.

Elsewhere, Kirk McGuire and his partner chase down two small time jewel thiefs. They split up and McGuire is disarmed and has his pistol stolen.

Sam and Twitch head to meet Jimmy Murphy. Murphy tells them the guy is a calculated professional and everything in the video of a clue. a tattoo, dated papers, and sinkholes eyes. They believe he's in the 35to45 white male category. Twitch walks out rather abruptly. Sam chases him down and tells him he needs to relax.

Sam heads to Tupelo Bar for a drink. Tracy the Bartender convinced him to call Twitch's wife as she is the cause of most of his issues. Sam calls Helen and tells her to consider talking with him. Sam hangs up and feels better. Tracy tried to talk him into a date for a cup of coffee. He replies he has a lot going on and will have to think about it.

Sam meets with Jimmy at Headquarters. He's brought to meet with Monica Straight who informed him McGuire will be placed on their case to help. Sam thinks she is crazy. Monica tells him her bosses are pushing McGuire as they want him to cut his teeth on a high profile case.

Retrieved from "https://imagecomics.fandom.com/wiki/Sam_and_Twitch_Vol_1_21?oldid=42776"
Community content is available under CC-BY-SA unless otherwise noted.