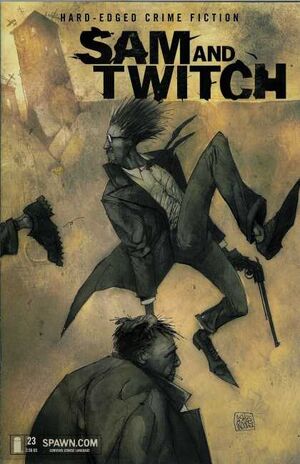 FBI agents Unger and Hunt discuss the evidence given to them by Kirk McGuire. Jim Unger tells him he's found evidence that McGuire's credit card has been linked to purchasing black Ski masks. One of the sports equipment employees has even mentioned a large order by McGuire's name. They discuss letting Sam Burke and Twitch Williams know about their findings. They think with his family's standing in city hall he could easily have gotten Sam's address, and as an officer he could easily gotten access to their office to plant the tape.

At that moment, Kirk McGuire entered the room. Sam gets hot with him when he denies everything, including heading to the sports store where the employee named him. They decide to split up. Twitch takes McGuire to the store to ask the hard questions while Sam helps the FBI research ulterior motives.

Twitch tells McGuire he doesn't believe he's innocent, but that's why they're heading to the store to find out. They speak with Bill, the store manager of Coach's Corner. They learn Tom Beeston, the employee who identified McGuire, hasn't been too with in several days. They get his home address to investigate further.

At the Beeston residence, Twitch and McGuire meet with Mrs Beeston. She shows him a photo and is confused as to why he would disappear.

Twitch returns to his home and plays his voicemail. His son called and offers him a dinner night with the family per Helen Williams' recommendation.

Sam meets with Tracy for their date. He opens up to her about burying himself in work since he's never been good with women. They party ways and Sam heads to his apartment.

Twitch sneaked into FBI office to steal evidence on John Doe Killer files. Brought it to Sam's to review with him. They feel like they are running out of clues as they review the information they do already know.

Later that night, the John Doe Killer sneaked into Tracy's apartment as she slept.

Retrieved from "https://imagecomics.fandom.com/wiki/Sam_and_Twitch_Vol_1_23?oldid=42778"
Community content is available under CC-BY-SA unless otherwise noted.