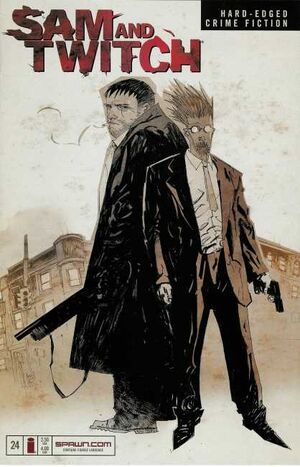 Sam received a phone call from the John Doe Killer. He warns Sam that he's messed things up and that he had grand plans for him. He threatens Tracy as he's been watching Sam the whole time and knows she means something special to him. After the Killer hangs up, Sam immediately calls Tracy. When she doesn't pick up, he rushes over. He finds her missing from her home.

Sam heads to Tupelo Bar where he speaks with an employee that says she didn't show up for work. A sudden call if made to the bar where they ask for Sam. On the phone is the John Doe Killer who tells him if he wants Tracy to live he needs to start doing what he says. He tells him to head to his apartment and wait for him there.

At police Headquarters, Monica Straight chews out Kirk McGuire. She says if he is innocent, he needs to find the evidence quickly.

At Sam's, a knock at the door Pits Sam on high alert as he pulls his gun out. He found open the door and is shocked to find Tracy waiting outside. She hands him an envelope that someone told her to give to him. She tells him she's fine and just lost track of time. Sam ushers her out to a cab and tells her he can't see her anymore.

McGuire breaks code and stood to talk to Twitch. He tells him he's pulled some strings with his dad and gives him files on the John Doe Killers Investigation files. He asks Twitch to find the pattern. So far the Killer has always picked loners.

At Sam's, he puts the tape on which is a direct message to him where the Killer tells him he can have his pick.

Retrieved from "https://imagecomics.fandom.com/wiki/Sam_and_Twitch_Vol_1_24?oldid=42779"
Community content is available under CC-BY-SA unless otherwise noted.