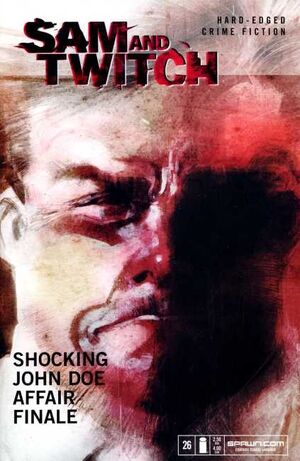 The John Doe Killer gets a phone call.

Outside, Sam Burke and Twitch Williams soon arrive in their Crimemobile. They sneak up to the building and spot the JDK. Sam finds back to the car to call for backup but trips on a lot. Unger and Hunt appear and hold Sam up at gunpoint. Sam tells Unger that Hunt is with the Killer. He points out the voicemail never said the address but Hunt knew where to take him any ways. He also notices Hunt isn't using his regular gun. When Unger notices some peculiarities he asks Hunt to switch guns with him. Hunt quickly turned and fires at Unger, killing him.

Sam takes off during the distraction but I is soon caught by Hunt. When he's just about to shoot Sam, McGuire arrives and killed Hunt first. They both rush towards the house to back Twitch up.

Twitch chases the Killer into the house. He bursts into a room where all of the victims are holding guns and have Ski masks on. Twitch reacts first and singles out the Killer and shoots him.

Twitch called Tracy Cane. She tells him she's moving back to Ohio. She asks him to take care of Sam as he's all he has.

Twitch heads to his wife's house and begs her to take him back. She agrees and hides kids are excited to see him home.

Retrieved from "https://imagecomics.fandom.com/wiki/Sam_and_Twitch_Vol_1_26?oldid=42781"
Community content is available under CC-BY-SA unless otherwise noted.