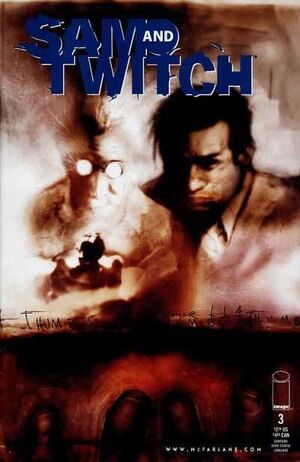 "Then in her eyes I had somehow chosen between the two of you. So. She kicked me out."

At a Kiss concert, a boy named Nick and his girlfriend sit down in the nosebleed section. Nick is stuck in the neck by a stranger. He suddenly begins sneezing and coughing up blood.

Meanwhile, Sam Burke arrives at Barbara Rodriguez's office late. She begins grilling him about the bullet that ended up in Lieutenant Barnes's head. She is skeptical about his reports of the man in the trenchcoat. She tells him about her past in Centralia and that his problems don't matter to her. She also just wanted the right thing done.

Later, K.C. McRory enters work and finds the girl from the Kiss concert waiting outside. Inside she finds the boy who was stuck's body. His sheet says his name is Nicky Sangiacomo.

In the New York City Police Headquarters, Rodriguez plays the tape she recorded of Twitch Williams admitting they were keeping the case quiet and withholding details from their conversation with the police chief. Sam storms out and runs into Roger Afflek. He pushes him in the bathroom and advises him off setting him up by making him run into the scene where his lieutenant was being beheaded. Affleck still claims innocence. As Sam walks away, the man in the trenchcoat walks out from behind the closed door.

As Sam storms through the hallways he encounters Twitch. He asks how could he ready him out and Twitch claims it was an accident. He wanted someone to talk to. Sam asks why he doesn't go home to his wife and Twitch tells him his wife left him for sticking with Sam on the PI job.

Suddenly, they are interrupted by K.C. running into the room. She tells them about the boy's name being Sangiacomo. She suspects he was injected with a mutated flu that kills people quickly. Afflek bursts into the room and starts coughing up blood. As the trio rush to his side, he spotted up blood in their faces and mutters his final words of, "Udaku."

Retrieved from "https://imagecomics.fandom.com/wiki/Sam_and_Twitch_Vol_1_3?oldid=42758"
Community content is available under CC-BY-SA unless otherwise noted.