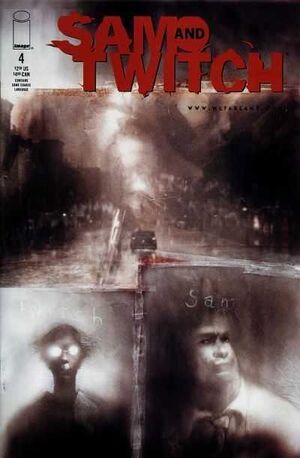 Sam Burke gets drunk at a bar and falls asleep. He has a dream of the man with the trench coat beating him senseless. He wakes up to Twitch Williams offering to take him home.

The next day, Sam heads to see Dee Afflek, Roger Afflek's wife. He said if she had ever heard of the name Udaku and she tells him she's unfamiliar.

Meanwhile, Twitch scours the internet for information on Udaku but comes up empty handed except for a bunch of Russian websites.

They heard to Izzy's pawn shop. They ask if he knows what Udaku means. Izzy looks concerned and pulls out a gun and blows his brains out. The duo turns around and spot the man in the trench coat. They give chase to the man. He heads into the sewers. When Twitch heads down as well, the trenchcoat man sneaks up behind him.

Retrieved from "https://imagecomics.fandom.com/wiki/Sam_and_Twitch_Vol_1_4?oldid=42759"
Community content is available under CC-BY-SA unless otherwise noted.