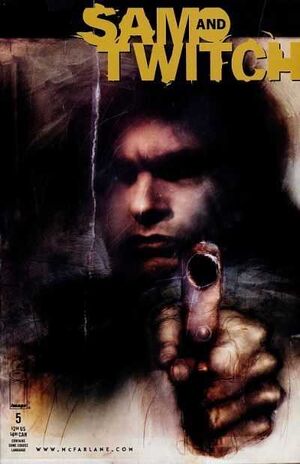 Twitch Williams turns on the trenchcoat man and fills him with bullets. A gas emits from the man and his clothes drop to the ground. Suddenly up above, Sam Burke is confronted by several trenchcoat men. The suddenly disappear. Sam hears a noise from the sewer and fires a round blindly into the sewers winging Twitch. Sam apologizes profusely but Twitch jokes they are now even since he accidentally ratted on him earlier.[1]

The New York City Police Department arrive and give Sam a hard time. Izzy's murder scene is missing a gun and K.C. McRory was placed on leave. The duo decide to leave the scene.

Twitch heads to New York City Police Headquarters where he finds K.C. He attempts to apologize but she is drunk and enraged at being let go. Outside, Sam is propositioned to enter a Sangiacomo vehicle. He's told by Jackie Sangiacomo who is pulling his strings.

Twitch and Sam walk into Barbara Rodriguez's office and find an audio bug. Sam rips it out and tells them they are about to have company. The Feds suddenly break into the room. Barbara tells them all to stand down. Sam knows she needs them and their information. He demands they stop spying on them, they reinstate Dr. McRory, and leave them alone so they can do their job.

Retrieved from "https://imagecomics.fandom.com/wiki/Sam_and_Twitch_Vol_1_5?oldid=42760"
Community content is available under CC-BY-SA unless otherwise noted.