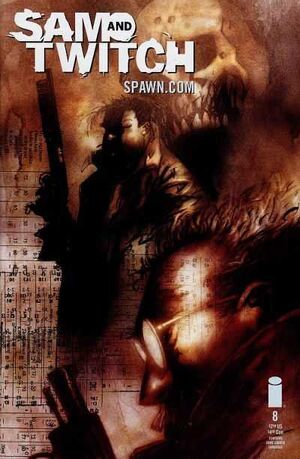 At the hospital the lights suddenly go out. Barbara Rodriguez calls in support but received radio silence from her guards posted outside. Sam Burke and Twitch Williams peak outside and see no one. They decide to go investigate and leave the room.

They run into several trenchcoat men and begin running away from them as they begin to internally combust.

Twitch heads back to the room to check on K.C. McRory. She tells him she successfully hid in the closet. She saw the blonde woman who runs Udaku enter the room and take the tape they used to record Office Falsone's confession.

Twitch chases down a foreign vehicle and shoots it causing it to crash. Cecilia Udaku emerges and tells him sending her to jail won't do anything. When she's exported back to Johannesburg, her family will have her released as she owns the courts. She threatened she will return and kill his kids. Twitch tells her to put down the gun even though she is unarmed. He then shoots her in the head. Sam is baffled at what just happened and then Twitch shows Sam he has an audio device recording that would act as evidence that she was about to attack him.

In South Africa, Cecilia's father receives the disturbing news of his daughter's death.

Retrieved from "https://imagecomics.fandom.com/wiki/Sam_and_Twitch_Vol_1_8?oldid=42763"
Community content is available under CC-BY-SA unless otherwise noted.