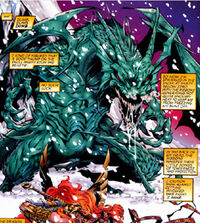 Base Of Operations
Sandalphon Five

The Sandalphon Dragons live on the icy planet Sandalphon Five. They are an elusive, and rare-breed to hunt with less than 50 suspected to be left alive.[1]

Angela received a Hunting Permit to kill one for her 100,000th birthday. After knocking her Angelic Ribbons unconscious and nearly besting her, she was able to drive a sword through it's eye and connect with its brain to kill one.[1]

A male dragon can be distinguished from females by their horns. Males have longer horns.[1]

Retrieved from "https://imagecomics.fandom.com/wiki/Sandalphon_Dragons?oldid=35635"
Community content is available under CC-BY-SA unless otherwise noted.