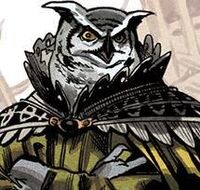 He came to Keneil with his daughter Enna to participate in the ritual. It was due to Sandorst's carelessness that resulted in the ritual in draining the magic spells that kept the city of Keneil afloat. Sandorst survived the fall, but immediately tried to place the blame on Gharta for the destruction, however it soon revealed Gharta was indeed successful in retrieving something from the confines of time.[1]

The gentlebeings were unable to see what their endeavors had brought forth. Sandorst was adamant that the wizards only brought a dead corpse. After the Great Champion was released from his crystal sphere, even saving the survivors from the marauding bison, Sandorst still refused to admit that Gharta brought the true Great Champion.[2]

When the Great Champion, also known as Steven T. Learoyd, refused to believe he was in a reality of anthropomorphic animals and magic, Sandorst attempted to use his authority to force the creature to protect them. Leayrod responded with violence brandishing his sword at the owl's throat, visibly scaring the wizard. After Prettyfoot, the traveling merchant came to the ruins of Keneil, he forged an alliance with her to gain a few comforts and strengthen his position.[3]

Retrieved from "https://imagecomics.fandom.com/wiki/Sandorst_(The_Autumnlands)?oldid=67998"
Community content is available under CC-BY-SA unless otherwise noted.