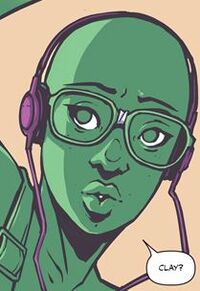 Sandy found Clay when he first arrived in Dedande City and gave him a place to stay. She practices voodoo.[1]

One day, Clay returned to their apartment with footage of the crime lord, The Thumb. However, when he attempted to review the footage, he was attacked by the Teleshaman, one of the Thumb's strange allies who can suck people into electronic mediums. He was rescued by Sandy who used her voodoo to summon Papa Legba and rescued him from the Teleshaman by pulling him out wit his analog tape powers.[2]

Clay went to visit Sandy but the two were suddenly attacked by the The Second Line, a mercenary group that uses audio as a weapon. They escaped to the safe-house that Bridgette gave Clay earlier. However, the warehouse was soon compromised as well. The Second Line abducted clay. Sandy recognized Bridgette's name and knew who to go after when Clay was abducted.[3]

Retrieved from "https://imagecomics.fandom.com/wiki/Sandy_(Limbo)?oldid=54470"
Community content is available under CC-BY-SA unless otherwise noted.