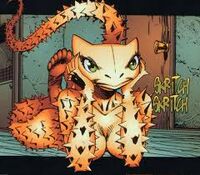 Sara was the child of George Dexter and Megan Tully. Meggan Tully was dating George Hill. One night she was abducted by aliens and impregnated, the event was wiped clean from her memory and she was returned to her car. When Meggan discovered that she was pregnant, it was assumed that George Hill was the responsible party, and the young man "did the right thing" by marrying his lover. When the child was born, a disfigured freak, the devout religious couple was convinced that God was punishing them because they had premarital sex. They kept their daughter chained up like a dog in their basement with only a flickering television set to keep her company, resulting in her current simple nature.

After years of guilt and suffering, George and Meggan Hill took their own lives in order to escape their torment, abandoning their daughter to survive on her own. Poor Sara was found by a paperboy and the Chicago Police Department were sent in to investigate. Dragon befriended the young woman and took her back to his station house.

CPD's Captain James Stewart was extremely enthusiastic about assembling a superhuman team for his department and added the mentally-deficient Sara Hill, giving her the codename Horridus to his "Freak Force" program. It was there where she met Dragon, Rapture, Barbaric and Ricochet who was, at the time, too young to join the department. Due to restrictions imposed by the local government and their police superiors, the freak officers quit the police force and struck out on their own as bounty hunters, joining up with the veteran hero SuperPatriot and the new Mighty Man.

Freak Force went on to battle a number of menaces, ranging from the super villains like the Fantastical Force, the Covenant of the Sword, the Throwaways, Master Atom, Bludgeon, their own evil clones and the Frightening Force, to the extraterrestrial Martians, Matrix Swarm and Cosmic Cops. They even faced off against other heroes like Badrock, the WildC.A.T.s and Cyber Force.

For a time, Horridus lives with Rapture. At this point she hadn't figured out that she is pretty sharp and ends up breaking a water bed that Rapture bought. It's also during this time that she be friends and briefly dates Michelangelo of the Teenage Mutant Ninja Turtles.

Eventually, Horridus accompanied most of her teammates in joining the government’s Special Operations Strikeforce. She remained with the team for many years but when CyberFace took control of the planet, Horridus was left directionless. It was not long into his rule that she was abducted by the M.M.M.S. and taken to Australia.

When the Dragon dismantled this organization in Australia, the numerous imprisoned superhumans were liberated. The flying saucers of CyberFace then descended down to abduct all of those freaks present but Horridus managed to avoid such a fate. She joined with the only other two people to escape, Barbaric and Ricochet.

This trio eventually constructed a raft to travel back to the United States but they were attacked by a sea monster. They were saved when Mako killed the creature and took them back to his Coral Sea Island home where he lived with Dart. Their arrival destroys the ruse that Mako had constructed regarding civilization having been wiped out and the group returns to the United States.

This quintet remained a loose-knit team until Mako became distressed over Dart’s rejection of him. He abducted her, taking the heroine back to their old island home where they would live undisturbed. Horridus and Dragon went after the kidnapped Dart but she was later killed in the confusion of their fight.

Since that time, Horridus struck up a relationship with the now demonic looking Rex Dexter and the two became lovers. It was then that Horridus was framed for murder by the second Dart and sent to prison. She escaped during a massive breakout and remained on the loose until Solar Man marked her for death. Rex returned to save her life and discovered that Horridus had given birth to their daughter, Dixie.

Horridus’s name was cleared and she married Rex, finally becoming part of a real family for the first time in her life. This family lived in the underground bunker built beneath Dragon’s former home and it was from here that Dragon, restored to his original Emperor Kurr persona, cast the family out into Dimension-X and left them stranded.

Horridus and her family traveled through Dimension-X for quite some time until they were found by Robot Rex who had turned and new leaf and sacrificed his life so Horridus and her family could escape the planet. Rex soon ran into Glum who in exchange for Rex nursing a wounded Angel would send Rex and his family back to Earth. Glum honored his word and sent them all back to Earth.

Later, Malcolm and Angel seek out Rex to help deal with the Tyrrus Combine's invasion of Earth. Horridus is seen having sex with Rex as the kids walk in on them. When Malcolm and Maxine visit Horridus and her family, it is revealed that she is joining the SOS in Washington and is already packing for the move. Her husband Rex, is later killed by Glum in Dimension-X.

Retrieved from "https://imagecomics.fandom.com/wiki/Sara_Dexter?oldid=66550"
Community content is available under CC-BY-SA unless otherwise noted.