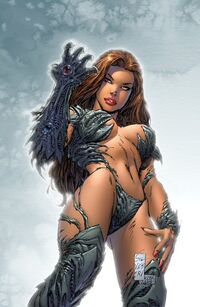 Sara Pezzini was born November 18, 1970, and is of Italian descent. Her major enemies are Kenneth Irons (whom she briefly dated before discovering his evil nature) and Ian Nottingham. Sara has above average intelligence, and is very athletic. She has police training in hand-to-hand combat, weapons, and tactics.

As the current wielder of the Witchblade, Sara has been granted many unique abilities, including the power to heal herself, to create (often very revealing) armor over her skin (as the Witchblade tends to rip away all of her clothes), to shoot energy blasts, to extend razor sharp tendrils and even winged flight. She has yet to explore the full limits of the Witchblade, and thus does not know what other mystical abilities it possesses. When not overly active, the Witchblade can assume the form of a bracelet, allowing her to wear the weapon without drawing attention. The Witchblade is a sentient artifact; as such, Sara does not have complete control over its actions and reactions.

Sara first appeared in Cyblade/Shi #1: The Battle For Independents in 1995. She had wanted nothing more in her life than to be a good cop. As a homicide detective in New York City, life was challenging enough, but for Sara, those were simpler times. While on an undercover case at the Rialto Theater, both she and her partner, Michael Yee (named Danny Woo in the TV series), were mortally wounded. At this same theater was a man named Kenneth Irons, who had brought a gauntlet known as the Witchblade. Irons was in search of the secrets to unlocking its power.

While Sara lay dying, the Witchblade made its choice to include her in the long line of women that it has shared its power with. The mystical artifact healed Sara's wounds and allowed her to survive the resulting confrontation. Since then, she has seen many things she never knew existed, fought creatures that have no place on Earth, and longed for the days of a typical NYPD detective. But she continues her struggle with the Witchblade, believing that she can do more good with the weapon than without. So the battle for control continues, as Sara learns more about this mysterious artifact of power and struggles to stem its violent nature.

Some of Sara's allies include The Magdalena, Lara Croft, and Jackie Estacado. One crossover pitted her against Wolverine. In the comics recently, Sara has been through a grueling ordeal fighting off a giant demon (a false "god" summoned by a group of priests), in the midst of which her partner, Jake McCarthy, was left wounded. Before losing consciousness, Jake professed his love for Sara and told her that he always knew about her double life. He now remains in a coma, and Sara has had to deal with a nosy new partner, Patrick Gleason, who has already discovered many of her secrets. Gleason saved her life and it had begun to look like they may become more than just partners, but their date was interrupted when Ian Nottingham abruptly returned to Sara's life.

Sara discovered she was pregnant, a situation that confounded her, as she has not had sex in over a year. Originally the father was unknown but her partner and lover Patrick Gleason is supporting her and standing by her side. Sara passes the Witchblade on to Danielle Baptiste, a dancer and the daughter of her police captain.

It was revealed in First Born #1 that Jackie Estacado is in fact the baby's father. Jackie came to the conclusion (after an encounter with the Angelus' forces) that during Sara's coma Jackie, while possessed by the Darkness itself, used him as a host to father a child, a child of the Darkness and the Balance (witchblade) to upset the balance between the darkness and light. Sara gives birth to a baby girl, but is on the verge of death. Mysteriously, Danielle ends up sharing the Witchblade with Sara. Hope, Sara and Jackie's daughter, drives off the Angelus and in the end Sara, now wielding half the Witchblade, and her friends return to their lives.

As time goes on Sara comes under a change. It is revealed that when the Witchblade divided itself between the two hosts, each acquired one aspect of the balance it represents. Danielle kept the light (Angelus Force) aspect while Sara retained the dark (Darkness Force) aspect. The two came to blows and in the end Sara emerged victorious seemingly killing Danielle. Dani's friend and roommate Finch, currently possessed by the Angelus manages to save her as it always wanted Danielle for its host. Dani, now the Angelus has a brief fight with Sara and she restores the balance to Sara (as even whole, she was still under the dark aspects thrall).

The two make up and Sara is now whole again trying to make up for all the things she's said and done wrong during the time she was under the dark aspects influence.

Retrieved from "https://imagecomics.fandom.com/wiki/Sara_Pezzini_(Top_Cow)?oldid=65016"
Community content is available under CC-BY-SA unless otherwise noted.