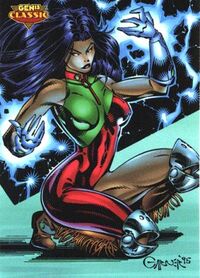 Rainmaker is the daughter of Stephen Callahan of Team 7 and half-sister of Matthew & Nicole Callahan (Threshold and Bliss of DV8).

Apache born, Sarah Rainmaker's powers first manifested while living on the San Carlos Reservation in Arizona. She soon came to the attention of the Ivana Baiul & her Keepers, who were ordered to capture the seedling and bring her back for testing. Sarah managed to elude her captors and fled to the desert. She remained in hiding for three days before Ripclaw of Cyberforce, a fellow Apache, discovered her.

Dispatched by Sarah's family to ensure her safety, Ripclaw was followed by Keepers. Stormwatch was also notified that a young girl in the desert had manifested and saw to it that she would be safely returned to her family. With the help of Battalion, Ripclaw was able to defeat the Keepers. Their victory was bittersweet. Waiting for Sarah were the I.O. officials who had sought Sarah in the first place. Brought to Project Genesis, Rainmaker met her future teammates, Fairchild, Burnout, Grunge, and Freefall. With the help of then I.O. Director John Lynch, Rainmaker and the others managed to escape.

Since then, Rainmaker and her teammates have successfully outmaneuvered Ivana Baiul and the rest of I.O. There have been moments of friction as the rest of the team is still adjusting to Sarah's sexual orientation. Most affected is friend and teammate, Burnout, who has a strong romantic interest in Sarah.

Sarah is an avowed activist and spends much of her free time going to protests of one sort or another. She also has a tendency to lecture her teammates when they (often) fail to live up to her standards of political correctness. This habit is seen as both an annoyance and source of amusement by the rest of Gen¹³.

Rainmaker caused a great deal of controversy in comic book fandom when she proclaimed herself to be a lesbian in the second issue of the ongoing Gen¹³ series. However, future issues would go on to show that the attraction that her male teammate Burnout felt for her was not entirely unreturned.

This development also proved controversial. Some gay fans of the series, who had rallied behind the character, saw this as backpedaling in the face of public criticism. Others praised it as a realistic depiction of a young woman struggling to find her sexual identity. After seeming to go back and forth on her sexual orientation (which also became something of a running joke among fans and her teammates), Sarah eventually proclaimed herself to be bisexual in an issue written by Scott Lobdell.

While her sexuality was an important aspect of her character, Sarah showed a fair amount of depth beyond her orientation issues. She was very uninhibited - to the point of swimming nude in front of her male teammates without batting an eye. Rainmaker also takes great pride in her Apache heritage and is quite knowledgeable about her tribe's ancient customs and legends.