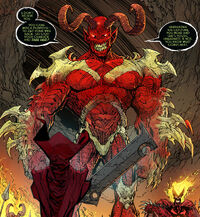 Along with his adversary, God and Satan are both children of the Mother of Existence, the creator of the universe and all its worlds. Mother gave each of its infinite children a world to run as they wish; God and Satan were both given Earth. Having a different point of view, the two constantly bickered and fought to the point where they declared war on one another. Mankind was subsequently created by God, but given free will by Satan. Due to this combination, Mother viewed humanity as unique, and decided to act on their behalf, rather than let her children use them as cannon fodder. Regarding God and Satan as disappointments, she stripped both of her children of their kingdoms and made them sleep in a forgotten corner of the universe. Mother was willing to give them a second chance, however, when she brought back God and Satan as the human children of Terry and Wanda Fitzgerald, Jake and Katie Fitzgerald respectively, in order to give them an appreciation for humanity and change their ways. This plan failed, as the twins simply became more insane than before and began to wreak further chaos on Earth. God and Satan have since regained their memories, powers, and kingdoms, and are bolstering their armies for the final push towards Armageddon.

The stage for Armageddon is Earth. Humans are killed and the world is in utter chaos/order. Spawn intervenes on Earth's behalf and becomes the third main power in the war after being transformed into a god after eating from The Tree of Life and Death in The Garden of Eden. Spawn faces off against the Hellspawn of Satan's Army, declaring that the Earth realm belongs to him. Calling him a traitor for breaking his oath, the Hellspawn from all the ages converge on their "brother." Spawn battles the Hellspawn, calling upon the earth to swallow them, returning them to Hell. Hearing of this, Satan sends all of his remaining warriors after Spawn. Fearing that Spawn will unbalance Armageddon, God does the same. These events are watched by Mammon and a cloaked figure, whom Mammon responds to as a subordinate. During their exchange, it is implied that all is going according to their plan, and Mammon says that he should have never been doubted. As Heaven and Hell attack Spawn, he calls to himself all the power given to him by the Mother, and in a single display of power destroys the armies of Heaven and Hell, along with the rest of humanity. Laughing, he dismisses his act as a way to halt the Armageddon itself, leaving God and Satan without soldiers to use in their battle. He then asks the Mother to restore his children to their former glory and powers, but refuses to fight them. They eventually incinerate Spawn, then proceed their endless battle... fighting by themselves, in a barren, scorched Earth. Spawn, now given the powers of a god and the protection of the Mother, gains the power to recreate Earth, restoring everyone to life, but leaving humanity every memory of the Rapture. God and Satan have no role in the "new" Earth, because they're trapped in their perception of a barren Earth until they cease their seemingly endless fight, and Spawn, with his last act as a god himself, closes every door between Hell, Heaven, and Earth. Recently, Satan has willingly handed control of Hell to The Omega Spawn (Al Simmons).

Being the supreme ruler of Hell, every other Lord, including Mammon and Malebolgia, must answer to Satan's will. In his absence, Malebolgia served as the grand master of Hell, creating a massive army of Hellspawn to destroy Heaven. It would seem that Satan is highly feared by the other demons in Hell. For example: with the recent reappearance of Satan in Hell, Mammon seems to have fallen out of his place of power. Even his former servant Thamuz, seemed ready to turn upon Mammon and destroy him at Satan's command. However, Mammon manages to save himself from Thamuz by offering Satan a way to increase the ranks of Hell's army - namely triggering the San Andreas Fault. The only being in Hell who equals Satan is The Omega Spawn. Later Resurrection retcons the Man of Miracles and the arcs that involved them out of Continuity due to legal issues.

Satan sent his minions to earth's domain to kill Wanda Blake.[1] He had her soul taken to Hell where he awaited Spawn to rescue her.[2] Once Al arrived, Satan offered him a chance to once again relinquish his suit in exchange for Wanda's life. Spawn realized if he made the trade, he would be vulnerable and killed immediately. He turned down Satan's offer and Satan accepted his response as a declaration of war.[3] Spawn used a surprise attack with an energy blast and escaped with Wanda. Satan was furious and ordered Hellion to retrieve Wanda, as that was his one job.[4]

Satan made his first appearance in Spawn #158 where he is shown in the background as a large, massive humanoid with horns and a forked tail behind the newly empowered Katie Fitzgerald.