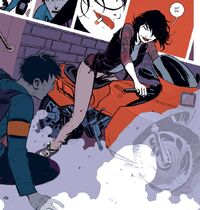 Saya watched Marcus for months upon behalf of King's Dominion Atelier of the Deadly Arts. Saya convinced Marcus to join and was his first mentor. She does cocaine with her friend Maria, but soon found herself at ends with Maria due to both of their love interest conflict with Marcus.[1]

While out partying, they found a deadly encounter with Chico, Maria's boyfriend who recently discovered Marcus was hooking up with Maria. The altercation ended with Chico being beheaded and his head be taken by F-Face, an old enemy of Marcus.[2]

Later, Saya slept with Marcus after a night of partying.[3] She also tracked down F-face and they group attacked the house to retrieve Chico's head. However, Maria almost let Saya die during the raid as she had discovered her love affair with Marcus.[4] Saya barely escaped with her life and soon saw her making out with Marcus back at school.[5]

Two months after Maria disappears, Saya is approached by Marcus and is told he loves her. However, she callously rejected him and told him she's with his friend Willie now. Marcus continued his emotional breakdown and began wondering what if Maria had been killed by Saya.[6]

Marcus began to push Saya and when he questioned her honor, she punched him in retaliation. Saya distanced herself from Marcus and here and Willie continued to watch Marcus from the shadows.[7]

Saya and Willie ran as they were pursued by Willie's old gang. They were eventually cornered in the library and Saya promised to protect him. She knew he wouldn't be much help and Willie finally told her the true story. His uncle didn't save him from the gang when he was a small boy. When the gang broke into his home, Willie grabbed a gun and accidentally shot his dad in the head and killed him. He was too afraid to use a gun ever since. Saya understood and turned to protect him. When she got knocked down, she was about to be killed but Willie worked up the nerve to save her by killing his old gang members before they could harm her. As Willie helped her up, he called her out and said she was quick enough to have grabber her sword and saved herself. He knew she had done it to help break him of his fear. They were, however, suddenly interrupted and called into Master Lin's office. There, they were given their next assignment, to kill Marcus for his betrayal to the school or face public humiliation to their own gang's for their failures to kill him. Saya was also warned that she was responsible for Marcus as she had agreed to be his sponsor when he first joined the school.[10]