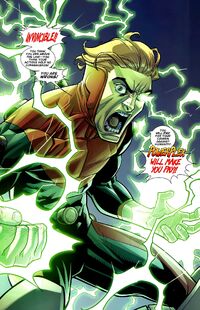 Not much is known about how Scott's origin. However, it is implied he was born in the United States that he had a sister that was killed by Omni-Man's battle with his son. He would have a child with a woman named Becky and married her.

Scott would put his plan into action by stealing bio-therm discs in order to help with energy storing powers. He also learns that the Pentagon knows about the bio-therm discs being stolen, making Scott nervous. He would instigate a crime in order to get Mark's attention. However, Shapesmith would arrive instead. He knocks Shapesmith back and he morphs into Mark. Becky would argue with him, after finding out about his battle with Mark. Scott would steal more bio-therm discs in an effort to store more energy. Next, he would insigate another scene with Bulletproof, Rex Splode, Robot, and Monster Girl arriving to the scene. He flies away and thinks a plan to get Invincible to come after him. He asks that his wife and son pose as hostages so that Invincible would save them. Invincible flies in and asks that Scott let them go. Scott reveals that his sister was working in one of the building Mark and his father destroyed during that battle. Mark attempts to apologize, but Scott refuses to listen. Mark pummels Scott and he absorbs the kinetic energy from his punches, firing it back at Mark. Scott manages to land many blows on Mark and puts a large surge of energy through him. However, the large surge of power gave him too much energy, causing an outburst that incinerated his wife and son. He looks over and begins to cry. Invincible attempts to comfort him, but he argues that that Mark made him kill his family. From observation, Mark learns how Scott's powers work and he bearhugs him, making Scott waste all his energy. Mark then transports Scott to Stronghold Penitentiary. Scott then tells Mark that someone will mess up and when they do, he will find a way to kill Mark.

After the damage caused by the evil versions of Mark, Scott manages to escape from the rubble and readies himself for planning to kill Mark.

Scott starts to help move the debris caused by the Invincible War. He notices Mark show through a teleporter and he starts attacking Mark. The Youngblood rush in and Shaft fires an arrow at him, giving him energy. He fires a bolt back at them and Mark attacks him while he's distracted. Badrock comes in and hold Scott down so that he uses up his stored energy. Badrock then transports him to the Pentagon where he would be taken prisoner.

Scott would then be given a second chance by Cecil Stedman and join the Actioneers along with Kinetic and others, even helping them. He would lose his temper after hearing about the destruction of Las Vegas between Dinosaurus's battle with Mark. He notices Mark flying home and attacks him, citing that he will never forgive him for what he has done. Mark argues that the death toll weighs on him. He also cited that it was Scott that brought his wife and son in his hostage scandal, stating that he killed his family, not Mark. Scott breaks down at the revealation and is imprisioned again. Scott would then be released again and help in the Flaxan invasion in London. They are successful and doing so, thanks to Monster Girl.

Scott would make a cameo appearance, being one of the many people to witness Mark's "death" on live television.

Retrieved from "https://imagecomics.fandom.com/wiki/Scott_Duvall?oldid=65327"
Community content is available under CC-BY-SA unless otherwise noted.