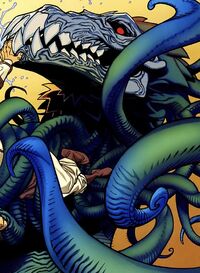 Nolan Grayson, an alien Viltrumite who came to Earth in order to infiltrate the planet as a superhero before conquering it, had to battle an attacking sea monster.[1] He later killed it before Cecil Stedman arrived to have his people clean up its corpse.

Retrieved from "https://imagecomics.fandom.com/wiki/Sea_Monster?oldid=63789"
Community content is available under CC-BY-SA unless otherwise noted.