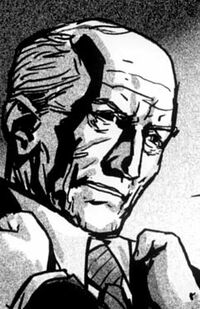 Seamus Halloran is the rich and powerful father of Senator Sean Halloran.

23 years ago, Seamus Halloran brought Sam Burke into his vehicle and offered Sam $10,000 for his discretion in not speaking to anyone about his son's homosexuality.[1]

In the present, homosexual allegation scandals arose against Sean. Seamus paid Robert Kellerman to murder all of his past lovers. After failing to kill Peter Draven, Sam Burke became involved to save his old roommate.[2]

The next day, Sean was suddenly attacked by his old lover, Peter Draven in his home. When his father disabled Peter and ordered Sean to shoot him, Sean stalled. He was continually pushed and began to realize that his past lovers were recently murdered by his father's orders. When his father called him a faggot he turned the gun and fired on his father. He held his father as he bleed out.[3]

Retrieved from "https://imagecomics.fandom.com/wiki/Seamus_Halloran?oldid=43216"
Community content is available under CC-BY-SA unless otherwise noted.