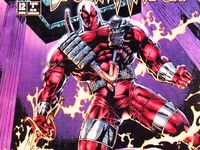 Seamus O'Brienn (better known as Deathtrap) is a supervillain who leads a superhuman group known as The MERCs. They were one of StormWatch's regular enemies on Earth.

Deathtrap was responsible for the kidnapping and imprisonment of StormWatch Prime during Operation Desert Storm. He has been hired by the most powerful and wicked individuals on Earth, including Kaizen Gamorra[1] and Lord Defile[2] (the latter who ordered Deathtrap to kidnap StormWatch Prime). Deathtrap had a heated relationship with team member Razor[3]. It is not officially known whatever became of Deathtrap and his team of mercenaries after their fight with StormWatch Prime. Although paid by Lord Defile for the successful mission of maintaining the secrecy of Defile's plans to use StormWatch Prime as his unknowing pawns during the WildStorm story arc, Deathtrap was not seen again.

After Savant's new WildC.A.T.s killed Troika member H.A.R.M., O'Brienn attended the funeral alongside the surviving Troika members, Attica and Slag. The WildC.A.T.s launched a surprise attack and captured all of them.[4] Deathtrap escaped while Hellstrike was criticizing the WildC.A.T.s for capturing enemies corresponding to Stormwatch.[5]

Deathtrap considered that attacking at a funeral was breaking the unwritten rules between superheroes and supervillains, so these new WildC.A.T.s had to be stopped before they terminated every villain one by one. To this goal, O'Brienn made an alliance with several othe villains, including Tony Twist, to make war on the WildC.A.T.s.[6]

When a villain known as "The Albatross" blew out superhero bar Clark's, the WildC.A.T.s got Fuji and some Stormwatch rookies as reinforcements for their war against Deathtrap's alliance. However, when Ladytron found the Albatross among Deathtrap's hostages, so he couldn't be one of Deathtrap's allies.[7] During a firefight, Deathtrap told Grifter that he had nothing to do with the explosion at Clark's, and that he would have done it following his own unwritten rules by giving the patrons warning time to escape. When the WildC.A.T.s found out that they had been manipulated into this war by their teammate T.A.O., Deathtrap left them alone to clean their own mess.[8]

Retrieved from "https://imagecomics.fandom.com/wiki/Seamus_O%27Brienn?oldid=71140"
Community content is available under CC-BY-SA unless otherwise noted.