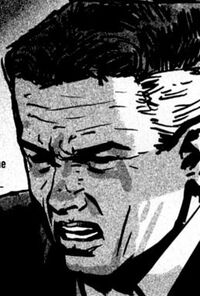 Sean Halloran is a New York Senator who came under fire from the public that he was hiding a homosexual scandal.

23 years ago at Whisleton Prepatory Academy, Sam Burke returned home and opened the door to his dorm room to find his roommate, Sean Halloran, sleeping with his roommate Peter Draven.[1]

Later, Sam Burke was playing video games with friends at a local arcade when he spotted his bike being stolen. He rushed outside to stop the man. He found Seamus Halloran, Sean's father, waiting for him. He welcomed him into his vehicle and offered Sam $10,000 for his discretion in not speaking to anyone about his son's homosexuality. [2]

Sam Burke returned to his dorm room. Peter Draven left as they had an awkward exchange of not talking about the homosexual discovery and the payoff offer from Seamus. Sam stared at his money and wondered what to do with it.[3]

Sean Halloran leaves the hospital with his wife and newborn child. He's accosted by the media who beg questions of the recent allegations that he is a homosexual. As a candidate for president of the United States of America, he denies the allegations and ushers his new family into the car.[4]

Over the next few days, Sean is berated by his wife for not acting like a man and always giving way to his father's ways.[2] When news breaks that his security guard was killed, he makes a press statement promising full cooperation into the investigation.[5]

The next day, Sean is suddenly attacked by his old lover, Peter Draven in his home. When his father disables Peter and orders Sean to shoot him, Sean stalls. He's continually pushed and begins to realize that his past lovers were recently murdered by his father's orders. When his father calls him a faggot he turns the gun and fires on his father. He hold his father as he bleeds out.

Later, Pete headed to a park to meet Sam. Pete dumped the body of his cremated boyfriend, Rob, into the river. Sam joked he promises not to report him for illegally dumping remains in public.[6]

Retrieved from "https://imagecomics.fandom.com/wiki/Sean_Halloran?oldid=43211"
Community content is available under CC-BY-SA unless otherwise noted.