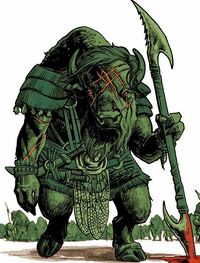 He later met with Goodfoot at night for information.[3]Through her Seven Scars learned of the identity of the stranger as Great Champion and the wizard's predicament. Though he wished to massacre the citizens of Keneil for all the humiliation the bison suffered, Goodfoot convinced him he should let some live so it will appease the Cities. He planned to kill the Great Champion, loot the city and enslave the populace to hold at ransom.[4]

Retrieved from "https://imagecomics.fandom.com/wiki/Seven-Scars_(The_Autumnlands)?oldid=59917"
Community content is available under CC-BY-SA unless otherwise noted.