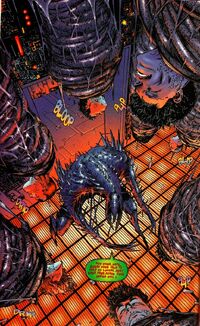 Sh'rrrnn is a fugitive alien princess and former member of ex-Army Major Morgan Stryker and his superhero mercenary team Strykeforce.

Sh'rrrnn's arrival from her planet aboard Skywatch is suggested to have taken place some extended time before the opening of Issue #4. It was after a returning dropship reported to Weatherman One, that Sh'rrrnn first appeared as the pilot Kincaid[8]. As Kincaid, he was blamed by displeased Stormwatch member Fuji for nearing killing the Stormwatch One team with his incompetent flying of the dropship. Kincaid then spoke privately with Weatherman One about his change in his job performance as Weatherman One noted he was a perfectionist and top-grade pilot. While in Weatherman One's quarters, Kincaid seized the chance to assault Weatherman, grazing his arm with an alien claw when Kincaid broke from his charade. He then replicated himself as Weatherman One before being interrupted by a sudden call from the Skywatch control room[9]. Kincaid fled, leaving behind a horrified Weatherman who realized he could trust no one after seeing how perfectly the alien could clone itself as anyone aboard the spacestation.

Sh'rrrnn's next guise was as a station hand named Dennis[10] who witnessed the arrival of Stormwatch Team Five (a cover for Morgan Stryker and his Strykeforce team as Stryker was friends with Weatherman One and agreed to help him). Dennis suffered a sudden spasm and avoided further contact with his friend and co-worker and fled into a hallway. Sh'rrrnn had neglected to "renew" her guise and desperately fled to her lair. Once there, it was revealed she held numerous crew members, immobilized and unconscious. Here, Dennis was suspended upside down and immobilized where Sh'rrrnn extracted a blood sample through her tongue.

Sh'rrrnn went on to clone herself as various team members from Stormwatch and Strykeforce including Black Anvil after his confrontation with Stormwatch member Cannon. Next, Sh'rrrnn would clone Cannon, leaving him in her lair. She then contacted her father and emperor of her home planet to explain her delay in taking over the spacestation. Her father warned her to not to let her newfound care for humanity interfere with her mission. She went on to fight Strykeforce and Stormwatch.

During the course of the mission, Sh'rrrnn went on to contact her home world. Failing to seize control of Skywatch in the time granted by her superior, she was relieved of her mission and thus more of her species the Shu'rii came to Skywatch through a dimensional portal their species can create. They went on to battle Stormwatch and Strykeforce. Sometime during the fighting Strykeforce member Bloodbow was killed. Sh'rrrnn went on to assume his form in an effort to atone for unwittingly or accidentally causing his death. His body was left behind on Skywatch after Strykeforce returned to earth[11].

Sh'rrrnn secretly lived with the team for several uncounted months. She would go on to endure an continued personal problem. That problem was maintaining her guise as the late Bloodbow while cloaking her presence from her pursuers the Shu'rii. Sh'rrrnn suffered an apparent identity crisis, unable to truly assimilate into Earth society as a human. To complicate matters, she could not reciprocate to the affection shown by teammate Tempest[12][13].

. Further intrigue followed with deciding whether or not to "alter" Bloodbow's physical form i.e. gender from man to a woman. Sh'rrrnn privately did so, but because of her prevailing fear of the consequences from the rest of the team, she kept Bloodbow's gender intact as a man.[14] She served the team in its latter missions including their mission in the Himalayas[15], followed next by a mission to the Amazon[16] and finally a mission to rescue Dominique Beaner--Stryker's accountant. It was during that mission, Bloodbow and the team were ambushed by Dr. Brainard's Industrial Accidents. The team fell off a catwalk inside a warehouse, resulting in Bloodbow being fatally impaled on a metal rod.[17] Sh'rrrnn relinquished her guise as Bloodbow after Stryker and the rest of the team were subdued. She survived the impalement by reverting to her alien form. Shortly after, Sh'rrrnn was assaulted by the Industrial Accident cyborg Magnolia Steele[18][19]. During the fight, Sh'rrrnn neutralized her when she sampled her blood. Still injured, Sh'rrrnn only was able to halfway clone herself as Magnolia Steele. The transformation still gave Sh'rrrnn enough of Magnolia's memories to locate where Stryker had been held captive by Brainard. During her rescue attempt, she met another cyborg simply known as Specimen Q[20]. Together they rescued Stryker and fled Brainard's lair in one of his shuttlecrafts. Still retaining Magnolia Steele's form, Sh'rrrnn fought the pursuing Industrial Accidents atop a New York skyscraper. Strykeforce regrouped and joined the fight. During the activity, Sh'rrrnn assumed Dominique Beaner's form (Beaner was in New York and helped vouched for Strykeforce's innocence when they were dropped in the middle of Manhattan by Brainard's team) and thus said her farewell to the team (although they had no idea she had previously been Bloodbow). Stryker also would not be seen by Strykeforce for a time as Cyblade and Heatwave of Cyberforce, took Stryker away to repair his badly-damaged cybernetics after his torturous dismantling at the hands of Brainard.

Sh'rrrnn returned to Beaner's Manhattan apartment to determine what next to do. Meanwhile, a Shu'rii extermination party had been formed to kill her. Sh'rrrnn decided to go the Diable Marin, Strykeforce's submarine headquarters. There, she posed one last time as Bloodbow and confessed what had truly happened. She was slapped by Tempest for her deception. This was interrupted by the Shu'rrii attack aboard the submarine and the two teams of Cyberforce and Strykeforce joined briefly together to fight the aliens[21]. Afterwards, Strykeforce was disbanded by Stryker, deeming the team's creation as a mistake[22].

Retrieved from "https://imagecomics.fandom.com/wiki/Sh%27rrrnn_(Top_Cow)?oldid=56608"
Community content is available under CC-BY-SA unless otherwise noted.