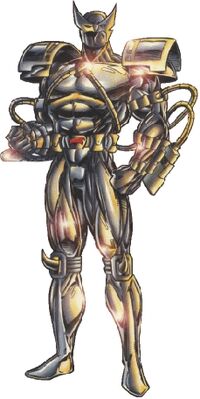 In the wake of Paul Johnstone's death, it was revealed that ShadowHawk is in fact a Spirit of Justice, and the spirit has inhabited at least four people in the past. Three of the revealed ShadowHawks were human, one a robot (first shown in Shadowhawk #13). After the Spirit of Justice leaves the robot it becomes "Justice", without human feelings and starts to kill people. The saga of the robot ShadowHawk was told in a crossover story called ShadowHunt which ran through five Image titles in April 1996. At the end of New Man #4,the robot was destroyed.

Retrieved from "https://imagecomics.fandom.com/wiki/ShadowHawk_(Robot)?oldid=66497"
Community content is available under CC-BY-SA unless otherwise noted.