"A Good Night For Arson" 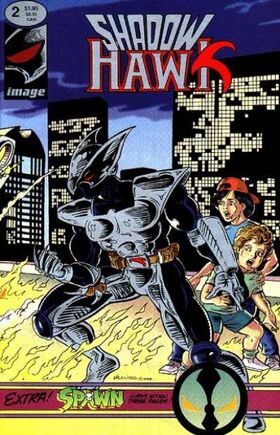 Appearing in "A Good Night For Arson"

Plot Synopsis for "A Good Night For Arson"

After a confrontation with Spawn, ShadowHawk goes up against a firebug called Arson.

At Morningside Park, four people were killed by thugs, attracting the attention of ShadowHawk, who beat them up. Meanwhile, Jamie Anthonette was at a party with Thurston J. Burns, when Vendetta told them that Lt. Jacks had arrived. Deputy Mayor Saul P. Davis arrived and spoke to Jacks, saying that the mayor had ordered the detective to stop pursuing ShadowHawk. Arson was burning down parts of the city. ShadowHawk met with Spawn, who left after the former told the latter of his plans to pursue Arson. Then, ShadowHawk jumped several stories off of a rooftop, attacking Arson. He defeated Arson by throwing a shuriken at his gas, causing an explosion. At the hospital, Tajana Juarez told her brother Jaime that she would go after the person who put him there (who happened to be ShadowHawk). Hojo was in an alley, feeling stomach pain and was searching for ShadowHawk. Meanwhile, the Liquifier emerged from the sewer.

Retrieved from "https://imagecomics.fandom.com/wiki/ShadowHawk_Vol_1_2?oldid=74732"
Community content is available under CC-BY-SA unless otherwise noted.