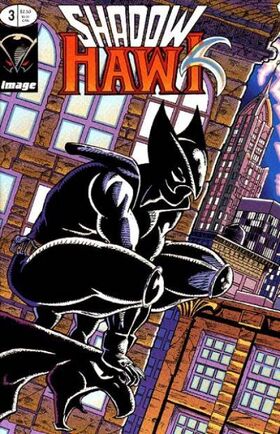 After a battle, ShadowHawk collapsed in an alley, as a young woman named Dice walked by, before being killed by the Liquefier. Tajana Juarez arrived at Maxi Boldd's apartment, where the latter agreed to help the former confront ShadowHawk by sending her friend Blakjak. The police found the remains of Dice in an alley, as a journalist named Jeannie reported the killings. At the Midtown police station, Captain Frakes accused Lieutenant Jacks of being ShadowHawk. Meanwhile, ShadowHawk searched for the Liquefier, when he found it, along with Hojo, and Arson. Arson refused to help ShadowHawk and decided to look for Vendetta, while the vigilante fought the Liquefier. Afterwards, Paul visited Hojo in the hospital, while Captain Frakes decided to bring his friend the Dragon from Chicago to confront ShadowHawk.