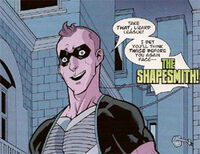 Shapesmith is a comic book superhero from Invincible Vol 1.

Shapesmith is a Martian, using his metamorphic abilities to disguise himself as astronaut Rus Livingston and fight crime. He has become a member of The Guardians of the Globe, mainly because Shapesmith captured Doc Seismic.[1]

Retrieved from "https://imagecomics.fandom.com/wiki/Shapesmith?oldid=65330"
Community content is available under CC-BY-SA unless otherwise noted.