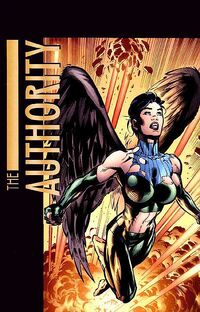 Swift, real name Shen Li-Min, is a comic book superheroine in the Wildstorm universe. Swift first appeared in the pages of Stormwatch and later became a member of The Authority.

When a comet passed by Earth, it activated a genetic quirk in some people that would manifest into superpowers either naturally or through special Seedlings called Activators. Swift was one such Seedling. Swift was brought into Stormwatch as a rookie, with her powers only partially activated. Weatherman Henry Bendix later reconfigured the Stormwatch teams, assigning her to Stormwatch Black, Stormwatch's black-ops team, alongside Jenny Sparks (with whom she had a brief romance) and Jack Hawksmoor. It was then that Christine Trelane offered to be fully activate Swift's powers, bringing out their full potential, and she accepted.

After Stormwatch disbanded, Swift joined former teammates in The Authority. Formerly a pacifist, she has put aside those beliefs to fight for a better world regardless of the cost. She has fought all over the world, from Moscow to Mexico to Gamora Island. During the Transfer of Power storyline, Swift was replaced by Rush from Canada after being taken out of a fight by radioactive feces. Swift was brainwashed into becoming the obedient trophy wife of a television mogul who had been part of the conspiracy to replace her and her team. She was insulted at every opportunity, from having her cooking ignored to the implications she could not remember large words. Eventually she overheard the "off-button" code of the monster Three-Willied Seth and proceeded to free herself. She literally took the heads of the television mogul and his software billionaire co-conspirator. She also saved her friend Angela Spica, the Engineer, and killed the man who had been abusing Angela.

Jenny Sparks once encoutnered a large egg, guarded by Tibetan monks for generations, prophesied to hatch a winged woman at the end of the millennium and usher in a golden age of love and peace. The egg's incubation was not uneventful - it had to be rescued from Nazi agents by Jenny Sparks in 1943. The mini-series this was shown in was said to show Jenny Sparks' first meeting with the members of the Authority, indicating that the egg contains Swift. However the fetus is unnamed or given any real interaction with Sparks, and this origin seems to conflict with what was previously known about Swift's life and powers. The mini-series has several continuity errors, so whether or not Swift hatched from the egg is unclear.

In East Asia the surname precedes the given name. Shen is a common Chinese surname, and Li-Men is a given name. However many comic book writers do not seem to realize this, as Swift's teammates refer to her familiarly as "Shen," and she has been addressed in the second volume of The Authority as "Ms. Li-Men."