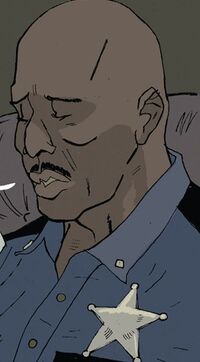 Sheriff Hardy was a fair and just police officer, that never had his way under the rule and thumb of Coach Boss.

Hardy played as the running back for the Running Rebs football squad in high school. His sweet heart was one of the Compson twins who he frequently made love to in school.

When he received an offer to play college ball, he had his legs broken by orders of Coach Boss who didn't want him leaving town. He found himself at the Coach's beck and call from then on out.[1]

Sheriff Hardy wanted to stop the madness being created by Earl Tubb on his one-man crusade against Coach Boss. Since he was under the Coach's orders, he left Earl to be and didn't get involved.[2] He attempted to stop the big showdown with Earl the next day but ultimately let him pass as he knew what happens when you crossed the Boss. Earl was killed at the hands of Coach Boss and the Sheriff pretended to not see it.[3]

Sheriff Hardy stayed at Earl's funeral after it was over. Ol' Big showed up afterwards and asked Hardy if Euless had beat that man to death in the street in front of everyone. The Sheriff couldn't find the words to tell him.[4]

The Sheriff was soon called in to Ol' Big's suicide. He was told by Euless to call it a murder in order to fire up squad against rivals Wetumpka. When the Rebs became heated over the murder of their favorite coach, Hardy waited at the county line to stop them as he knew the truth that they were innocent. He arrested the kids and averted a town murder.

The Sheriff returned home and visited the bank where he met his old Compson Twin lover. She told him to stop coming back and take his business elsewhere. As The Sheriff headed home, he put back on his wedding ring which he had hidden in his pocket.[5]

Retrieved from "https://imagecomics.fandom.com/wiki/Sheriff_Hardy_(Southern_Bastards)?oldid=35987"
Community content is available under CC-BY-SA unless otherwise noted.