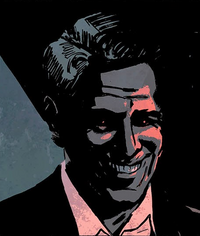 You know my name. Well...at least a few of them. I have so many.

While the Devil has many names, he has recently appeared as the mortal, Sidney. He has been secretly working with various possessed individuals who live near Kyle Barnes.

Sidney first appeared at one of the Reverend's sermons in Rome, West Virginia, though he remained in the back without announcing his presence. Even so, the Reverend could still sense something was off with Sidney.[1]

He later appeared in town where he saves Holly from being hit by a car and gaining thanks from Megan.[2] He continued to move closer to Kyle. When Kyle stopped by Norville's house, Sidney was waiting for him. He informed him Norville had passed away and as his brother he would take over the place and live next door to him for a while.[3]

When Kyle and the Reverend began asking too many questions, Sidney realized he needed to slow them down. He showed up at the Reverend's house and marked him with an inverted pentagram.[4]

He later stopped by Mildred's. He checked in on her status and preparation for The Merge. She attempted to steal energy from him but he reminded her that is not how it works.[5] When he checked in on Brian next, he learned the Reverend and Kyle were still interfering with his plans. He decided to pay a visit Reverend to put an end to his meddling.[6]

Soon, Mark was about to flee from Kyle's home to check on Megan. He ran into Sidney outside who watched over Holly while he was gone. When Holly woke up from her sleep, Sidney was standing over her and told her she'd be safe with him.[7] Holly asked him if he was her guardian angel but Sidney told her he's not. Sidney then put Holly back to sleep. When Kyle, Anderson, Megan, and Giles arrived, Sidney was assaulted by Kyle. Sidney took the beating but eventually told the police chief he'd like to press charges.[8]

Later, Sidney taunted Kyle. Kyle told him he's aware of who he is. Sidney and Kyle shook hands but Sidney noticed Kyle had not feared him at all. Sidney then teased Kyle at the possibility of his daughter being possessed.[9]

Retrieved from "https://imagecomics.fandom.com/wiki/Sidney_(Outcast)?oldid=60305"
Community content is available under CC-BY-SA unless otherwise noted.