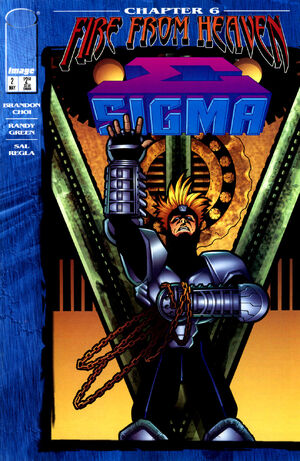 Appearing in "Fire From Heaven, Chapter 6 of 14"

Plot Synopsis for "Fire From Heaven, Chapter 6 of 14"

After an introductory news report catching us up on the Gamorran situation, the action moves the the hidden lab of Kaizen Gamorra, where DV8 is fighting Gen13 kids along with Grifter and Deathblow. Elsewhere in the base, Sigma, Dr. Tsung, and Maggie Monroe (Mother Goose) are facing the Sigma Clone, imprinted with the brain of the sadistic Miles Craven. Dr. Tsung implores Kaizen to shut down the clone, explaining about the arrival of Damocles. He tells of how he distilled the gen-factor from Sigma in order to create a band of super-powered beings to protect the world from Damocles upon his arrival, but later he realized that would not be enough so he trained Sigma to be ready. The Gen-Omega clone is sapping the gen-factor from Sigma, which is only weakening Earth's champion against Damocles. Gen-Omega is determined to siphon all the gen-factor from Sigma, and a fight ensues. Le Gauche opens fire, hoping to fend them off until Craven's brainwaves can finish being imprinted on the Gen-Omega.Elsewhere, in an alleyway, a dimensional rift opens and a creature known as a Reaver appears to carry out some deadly and unknown task.

In the skies over Gamorra, Alex Fairchild and Lucius parachute down from a small plane flown by Remo. A Stormwatch helicopter arrives and destroys the plane, but then Alex uses the mojo (gen-factor) to make himself and Lucius invisible. The pilot reports to Weatherman One on Skywatch 2 that they've disappeared, and then Weatherman gets a report of a distress call from Kaizen Gamorra, under attack in his compound. Weatherman dispatches Battalion, Fahrenheit, Cannon, and Flashpoint. Then a wounded Stormwatch officer staggers in and informs Weatherman that Moonwatch has been taken and an energy cannon has been constructed there. Weatherman orders a strike force assembled for a lunar assault.

Back in the lab, the fight between DV8 and Gen13 continues. Burnout and Jodi arrive, and they let Aries go so that they can join the fight. Aries promises to return with reinforcements and make them pay for humiliating him. Alex Fairchild and Lucius show up and join the fight as well. The battle rages on, and Alex uses the mojo to help Caitlin Fairchild take down Powerhouse. She's suprised to hear him mention the name Team 7.

A few corridors away, Sigma and Gen-Omega continue their battle. Deathblow arrives and takes on Gen-Omega so the others can escape. He discovers that Gen-Omega is actually Miles Craven reborn, and he's determined to finish Craven once and for all. Gen-Omega's body is much more powerful than Craven's old body, though, making it a difficult task. Le Gauche tries to help, but Maggie Monroe and Sigma (who didn't leave as Deathblow ordered) join the fight on Deathblow's side. Meanwhile, Kaizen Gamorra orders a hunter-killer squad to come and escort him away from the battle.

On the Moon, a dimensional rift opens and Damocles arrives. The Sword tells him that they have Qeelocke in custody and that Sigma is on Earth. Damocles plans to destroy Sigma's world in revenge for what happened on Damocles' homeworld. On Skywatch 2, they detect the dimensional rift heralding the arrival of Damocles, and then they track it as it shifts down to Gamorra.

Damocles arrives in the lab determined to kill Sigma. Kaizen's hunter-killers attack but he makes short work of them. Kaizen Gamorra offers to help, but Damocles simply reads the knowledge from his mind, and then in payment he decides to let Kaizen live. Meanwhile, Gen-Omega has gotten the upper hand and is sapping all the gen-factor from Sigma. But then something goes wrong, and Gen-Omega realizes that Kaizen failed to detect a virus in Backlash's gen-factor before using it to activate Gen-Omega. Gen-Omega staggers back, and Sigma is able to siphon all of the stolen gen-factor back into himself. Gen-Omega--Miles Craven--dies. Again. But then Damocles arrives and declares it is time for justice, and Dr. Tsung identifies him as the man from his nightmares.

Retrieved from "https://imagecomics.fandom.com/wiki/Sigma_Vol_1_2?oldid=68547"
Community content is available under CC-BY-SA unless otherwise noted.