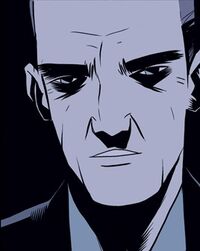 Simmons is a henchman of Gibson. He brought Antoine Wolf to Sterling at his request.[1] When Gibson became nervous about his investment in asking Wolfe to perform work for him, he had Simmons tail Wolfe as he went about his day.[2]

When they learned he was planning on freeing his brother from Prison, they kidnapped his friend, Freddy Chtonic.[3]

Retrieved from "https://imagecomics.fandom.com/wiki/Simmons_(Wolf)?oldid=44429"
Community content is available under CC-BY-SA unless otherwise noted.