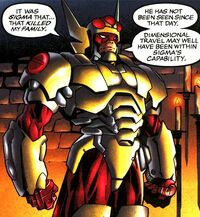 Damocles was once Simon Tsung, a scientist from an alternate Earth, who created a machine to steal energy from other realities and save his own. A lawman known as Sigma opposed Damocles due to the disregard it involved towards other worlds. All the energy of the machine went to Damocles, who survived thanks to his armor, but all his world perished. With the power from several Earths inside him, Damocles went on a multiversal rampage in search for Sigma, who was reincarnated in "our" Earth as Ethan McCain and raised by Damocles' own counterpart.

Retrieved from "https://imagecomics.fandom.com/wiki/Simon_Tsung_(Damocles_Universe)?oldid=65337"
Community content is available under CC-BY-SA unless otherwise noted.