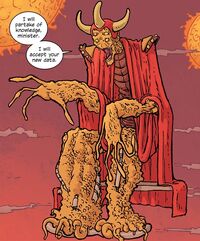 The ignorance of the young masquerading as arrogance.

The Great Sionox is a powerful leader of the colored Sionnu. He became greatly interested in tracking down the uncolored slave, Primor when the slave had gained possession of unlicensed spores. He was shortly thereafter contacted by Ryleth the Hammer. He agreed to grant Ryleth riches if he could capture the missing spores for him.[1] Their ship was boarded by the Sionnu. In retaliation, Primor launched a warhead filled with Spores at Sionox' planet. The planet was consumed by the spore and everyone dies on the planet.[2]

Retrieved from "https://imagecomics.fandom.com/wiki/Sionox_(The_Manhattan_Projects)?oldid=55430"
Community content is available under CC-BY-SA unless otherwise noted.