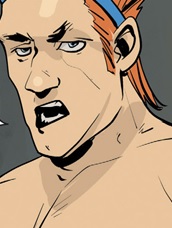 Slipjack is the stage name of a three-armed actor in the Open Circuit. He has his face blown apart by Dengo when Dengo wanted airtime on the Circuit and Slipjack stepped in his way thinking he wanted his job.[1]

Retrieved from "https://imagecomics.fandom.com/wiki/Slipjack_(Saga)?oldid=60239"
Community content is available under CC-BY-SA unless otherwise noted.