Start a Wiki
Snake the Dealer 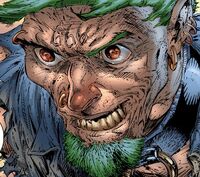 Snake was his street name as he ran illegal drugs in New York City. Several of his busts were stopped by Spawn and he wanted revenge.

Later, when the Frank brothers headed to New York City with hopes of seeing their 'friend' Spawn. They were caught up Snake's illegal drug trade. When Snake discovered the Franks new Spawn, he followed them to the alley to confront him. He was soon overpowered but accidentally murdered by the Franks during the commotion.[1]

Retrieved from "https://imagecomics.fandom.com/wiki/Snake_the_Dealer?oldid=31528"
Community content is available under CC-BY-SA unless otherwise noted.