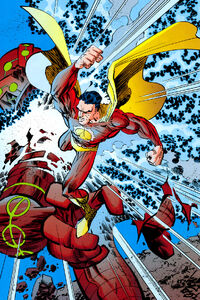 Solar Man was an alien who arrived on Earth in 1938, after his arrival he immediately started his vigilante career but towards the end of the Second World War he began to kidnap other superheroes to absorb their power.

During the seventies he began to kill criminals deeming them unworthy to live until he put an end to the life of the love interest of Sgt. Marvel who in revenge eliminated him from reality with the God Gun.

He was brought back to life in 2009 when Savage Dragon destroyed the God Gun during his fight against Mr Glum and immediatly resumed his killing spreed which led him to confront Savage Dragon who disagreed with his metods. When he decided to hunt down Spawn because of his mercenary past, the heroes Witchblade, Invincible, ShadowHawk and Savage Dragon decided to stop him and were forced to fight him, although his victory seemed certain the battle came to an abrupt conclusion when Rex Dexter frees the heroes from which Solar Man drew his power, causing him to weaken, leading him to be beheaded by one of Savage Dragon's punches.

Retrieved from "https://imagecomics.fandom.com/wiki/Solar_Man?oldid=67120"
Community content is available under CC-BY-SA unless otherwise noted.