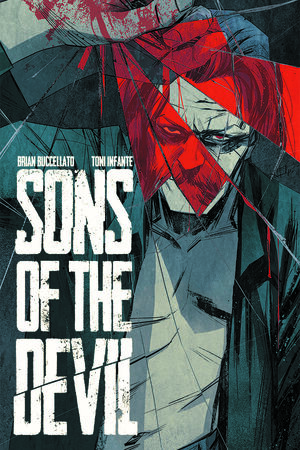 But if it was me... given what the killer said about you. I'd sure want to know if it was my fault my friend was murdered.

In California 1989, a Cult Leader chants about the number 99 and takes off his mask to reveal one red eye and one blue eye. He summons his children to the stage in front of many followers and cuts his thumb. He marks his children's lips with blood.

Elsewhere, Detective Pope is rejected by his sergeant for more time off from work. He suddenly gets a call from Vanessa that she doesn't feel safe and he begins to panic.

In the present in Venice, California, Travis Crowe and Melissa move Travis' stuff into Melissa's apartment. Detective Young stops by and asks piercing questions about how Klay died. He informs Travis that he had tons of research on him and Travis tells him he's made his statement and he was helping him find his biological parents. Young remains suspicious as he leaves Travis.

Eric Burton puts in a colored contact to hide his red eye. He leaves the man he was torturing in the room as he heads to his anger management class he leads. Travis shows up for class and Eric listens as the groups discusses various topics. He smiles when Travis acts confrontational with other members.

Later, Melissa picks up Travis from his community service work. She shows him a picture of the Cult Leader and tells him she found the guy who took the picture. They head to check out if the man knew anything about Klay and Travis recognizes him as Aaron Wilkes. When he chased, the enter a brief scuffle where Travis knocks Aaron unconscious. The police arrive and arrest the two of them. Aaron tells them to let Travis go without pressing charges.

Outside the station, Melissa waits until Travis is released. They drive off thinking it's weird no charges were pressed.

Elsewhere, Aaron gets into Eric Burton's car. He tells him he's completed his tasks per his request and did not press charges. Eric pulls out a gun and shoots a hole in his head, leaving him dead in the vehicle as he leaves.

Retrieved from "https://imagecomics.fandom.com/wiki/Sons_of_the_Devil_Vol_1_2?oldid=48958"
Community content is available under CC-BY-SA unless otherwise noted.