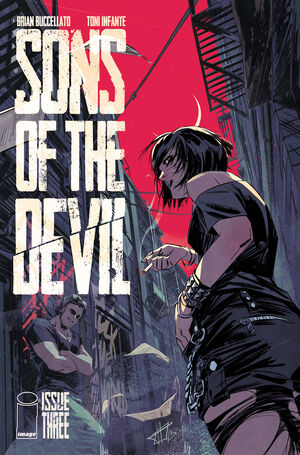 A vow that I will keep. No matter how long it takes. I will find them all.

A pregnant Vanessa and Tilly are driven by Henry to meet Vanessa's Dad, Detective Pope. Tilly reassures her that David won't find out and they should keep moving forward with the plan to meet with him.

Upon arriving at the diner to meet her dad, Henry waits outside. Inside, Pope is worried about his daughter's safety. They tell Pope they want out of the cult. They were originally looking for a fresh start but now feel afraid. Pope asks if Henry is dangerous and they assure him he's loyal to David, but not dangerous. They tell Pope they tricked Henry into driving them out there to meet him. They had lied and said they just wanted to tell him that she was pregnant. They tell him they don't want to escape now because Tilly has a son too and won't leave unless they save her too. Pope promise hell get them out as he walks them back outside to Henry. As they take off, Pope grabs the bottle Henry was drinking from for DNA and prints.

In the Venice, California, Travis Crowe and Melissa finish moving in together. Melissa tells them they need to purchase some items from the store. Travis replies he needs to take care of some stuff and he promises to meet her for dinner.

At the Venice Community Center, Eric Burton walks into the building. Travis catches up with him and asks if he'll sign off on him attending to the session even though he had other items to attend to. Burton refuses and tells him he needs to join the session.

Meanwhile at the store, Melissa speaks with her mother on the phone. Her mother is concerned for her happiness and Melissa quickly disorders her and pretend she has to go.

In the session, a man discusses his feelings about being adopted. When Travis ignores him and texts Melissa, the man argues with Travis about him being rude. They fight over if anything is being accomplished in these therapy sessions. Travis storms out thinking the whole process is worthless.

Outside a member from his group, Jenny, chases after him in an attempt to talk with him. Travis tells her he has a girl and needs to go.

At the bar, Travis rushes in to catch an annoyed Melissa who was just about to leave. He sweet talks her into staying. As they discuss, Travis remains aloof about his whereabouts. When he sees a man and woman being bullied, he steps in and attacks the bullies. Melissa leaves frustrated at Travis' actions and lack of attention and honesty.

Elsewhere, Eric Burton has an evil look on his face was he examined a board he's put together where he's placed clues and a picture of Travis in a map. He looks in the mirror and sees a his Dark Lord and promises to do his bidding. He turns to man tied up on the room who also has a single red eye. He pulls out a knife asking if the Dark Lord wants another taste of his children.

At the bar, Travis is ushered out to a police vehicle for assault. As he's placed in the back and the officers are distracted, Jenny and a man named Rory pull him out the back. They tell him they are helping him since he is family.

Retrieved from "https://imagecomics.fandom.com/wiki/Sons_of_the_Devil_Vol_1_3?oldid=48959"
Community content is available under CC-BY-SA unless otherwise noted.