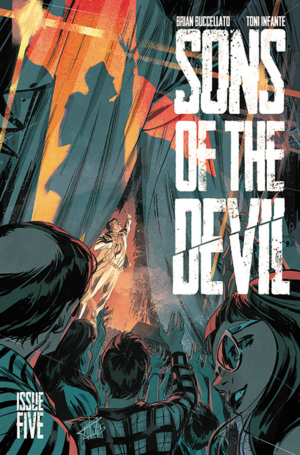 Appearing in "Lost and Found"


Plot Synopsis for "Lost and Found"

In California in 1989, Detective Pope continues to look into the case history of Henry Mills. He eventually decides to put out a call to detain and arrest Henry upon sight to other officers on the force.

Meanwhile at Blackbird Ranch, David is approached by Tilly and told that his son has been born. He tells her that he knows already. He enters the tent where Vanessa has just given birth. He holds the child with one red and one blue eye and announces he's perfect. He tells Vanessa he's the exact boy he's been waiting for.

Later that night at the camp, Tilly sits in the tend with Vanessa. She tells her that they will make a break for it soon. Vanessa has a sudden change of heart and tells her the camp is good for them and they should stay. She tells her she enjoys being a part of something. Elsewhere, David speaks with the Master and tells him about the boy born with the special eye. The Master orders him to murder everyone in the camp with the Devils's Claw Knife knife. However, Henry is waiting outside of David's tent and overhears his plans. He visits Tilly and tells her he doesn't want the child to be hurt...

In the present day of Los Angeles, Travis Crowe works at his mechanic job with his boss, Doyle. Travis complains about Melissa and how they are fighting over him keeping his anger management classes from her and hanging out with his sister.

Later at his home, Travis leaves to workout and Melissa gives him lip about secretly sneaking out to see his girlfriend, Jennifer, who she doesn't believe is really his sister.

Travis heads to LP Investigations. He checks in on Klay Landon's office. Detective Pope stops by and asks if he can help him. Travis tells him about how Klay was investigating David Daly. Pope offers his assistance.

Meanwhile at Travis' home, Melissa packs an overnight back. Her over assertive brother, Seth, attempts to convince her to leave Travis. He tells Melissa that Travis is no good for her right as Travis walks in. Travis lets his anger get the best of him as he attacks Seth in a physical altercation. Melissa breaks the fight up and as Seth leaves, he makes a comment about letting Travis be her baby's daddy. Travis is shocked to learn that Tilly is pregnant. He lashes out at her and tells her to go instead of talking to her about the news.

Meanwhile, outside David Daly sits in a car with Jenny. They spy on Travis' home with binoculars from a vehicle outside. Jenny suddenly receives a call from Travis who asks her if she wants to get the family back together again.

The final chapter of the first arc. A traitor revealed.

Retrieved from "https://imagecomics.fandom.com/wiki/Sons_of_the_Devil_Vol_1_5?oldid=48961"
Community content is available under CC-BY-SA unless otherwise noted.