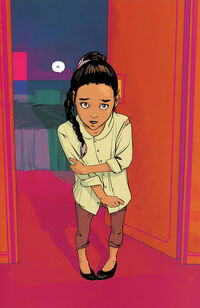 Slave Girl, or Sophie, was only six-years old girl when she was sold into a sex slavery business on Sextillion. She was held hostage by Mama Sun and forced into sex labor.[1]

When The Will visited the planet and saw what the girl was being forced into, he saved her from Mama Sun and brought her with him on his journey with Gwendolyn to find Marko. Slave Girl could sense that Gwen's necklace was lonely and they realized it may be lonely for the ring that Marko had taken from Gwen. Slave Girl was able to point them in the right direction to find Marko.[2]

They followed the lead to an outer-rim of space. The Will was horrified to arrive and find a Timesuck had recently hatched. His ship was badly damaged and they crash landed on a nearby planet.[3]

The Will called his insurance agent but found they would be stuck on the island for several days. While waiting, The Will gave Slave Girl a name, Sophie.[4] A few days later, Sophie stabbed The Will in the neck. She began having hallucinations of her mother due to the planet having traces of heroin in its food and water.[5]

After being tied up for several days, Sophie came to her senses and started helping Gwendolyn in her attempt to save The Will's life. They headed to Quietus to find Marko and use his healing abilities to save The Will.[6] When they encounter Marko, they learn that his spells only heal people from Wreath.[7]

Gwen and Sophie soon went on a journey to find a top secret healing elixir that could save The Will. They encountered The Brand who agreed to help them save The Will's life when she realized they were trying to help him. When they saw the ingredients, the next was dragon semen from Demimonde.[8]

Upon arriving on Demimonde, they were attacked by multiple dragons.[9] Sophie had Gwen use her translation pendant to communicate with the dragons. The dragons informed them there was only one male left and he was in a cave and that he was mean.[10] Upon arriving in the cave, The Brand warned them to stay back and let her retrieve the semen as she was more experienced. Sophie didn’t listen and forged forward. When the dragon woke and saw Sophie, The Brand jumped in to save her. However, the Dragon bit The Brand in half. Gwen attempted to use electricity to shock the dragon but burned herself in the process.[11]

Gwen and Sophie soon returned to Wreath hospital where they had left The Will. They gave him the antidote and he made a speedy recovery. He became enraged when he learned his sister had died protecting them in retrieving the antidote.[12]

Retrieved from "https://imagecomics.fandom.com/wiki/Sophie_(Saga)?oldid=60212"
Community content is available under CC-BY-SA unless otherwise noted.