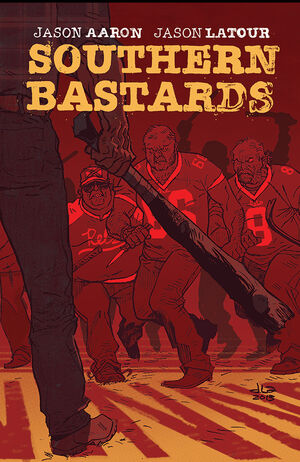 Appearing in "Here Was a Man, Part One"

Plot Synopsis for "Here Was a Man, Part One"

Earl Tubb drives into town talking on the phone with the voicemail of someone. He tells them he'll take about 3 days to visit Uncle Buhl and pack up the house. He pulls into town and sees the name, "Boss" plastered over all the building and wonders who that person could be. Early pulls up to his house and has a flashback about his father.

When he was a small boy his father stood up against the town. It was him and his signed baseball Tubb Bat against an angry mob. He told Earl he was the man off the house until he came back. He was ultimately murdered. Earl recalls news articles printed about how the sheriff that saved Craw County with a bat.

Later, Earl headed to Boss BBQ in town. He was waited on by Shawna who was suddenly called away by Dusty Tutwiler, an old friend of Earl's. Dusty tells Shawna he's looking for the Coach but she plays coy and says she's not sure when he'll be in. Dusty walks over and recognizes Earl from when he used to play and date his sister. Earl tells him he's only in town for a few days as he's packing up the house since Buhl is no longer able to take care of it.

Outside, Esaw Goings takes a piss. Materhead comes out and tells him Shawna called to say Dusty is at the restaurant. Esaw pulls out a gun and orders Materhead to have Dusty meet 'the coach' in the back.

Inside, Shawna sends Dusty to the back. Earl finishes his meal and hears a disturbance in the kitchen. He rushes in and finds Esaw with a gun to Dusty. He grabs a frying pot and smashes it over Esaw's face and pulls Dusty out. Surprisingly, Dusty is not thankful and tells him he shouldn't have meddled in his affairs as he walks off.

Early heads back to the Tubb House where Tad waits for him. He asks if he can watch TV in his house as his Granny won't let him. Earl tells him to get lost and calls his daughter back and gets voicemail once again.

Elsewhere, Dusty bangs on the door of Coach Boss' office and the Running Rebs appear in a pickup and beat him with bats.

Retrieved from "https://imagecomics.fandom.com/wiki/Southern_Bastards_Vol_1_1?oldid=63362"
Community content is available under CC-BY-SA unless otherwise noted.