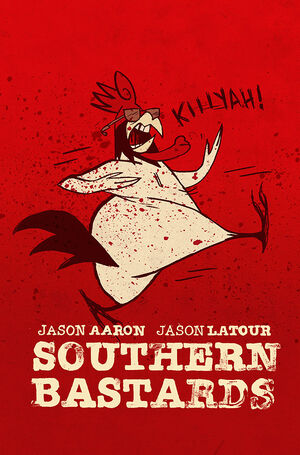 A good player is a soldier, and with enough soldiers -- what you've got is an army.

The night that the Running Rebs attacked Tad, Materhead sat on the stairs puking his brains out. The stress of attacking a young child got to him. As Esaw left the house, he teased Materhead and told him to get his act together.

In the present, Tad recovered in the hospital as nurses watched over him.

Meanwhile at Boss BBQ, Materhead nervously tells Esaw about seeing the dog again. He tells him whenever he sees the dog shitting somewhere, something bad happens. Esaw tells him to shut up and stop complaining. Materhead tells him the last time they lost to Wetumpka was when Rebel, the old school dog, bit the coach. He tells Esaw he thinks it's Rebel.

Later, Materhead feels remorse and visits Tad in the hospital. He brings him a bunch of Running Reb paraphernalia as he had heard he was a rebs fan. He tells him as soon as he wakes up he'll let him sit by the sidelines of every game. Tad suddenly hallucinates and tells the visions he has he'll bring them Coach Boss.

Later that night, the rebs take the field against Wetumpka. In his room, Tad wheels himself out in a wheelchair amongst a pack of wild dogs.

Retrieved from "https://imagecomics.fandom.com/wiki/Southern_Bastards_Vol_1_12?oldid=63366"
Community content is available under CC-BY-SA unless otherwise noted.