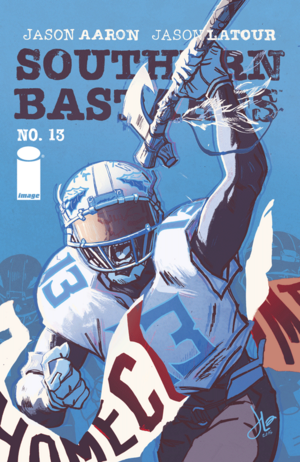 On the football field as the Running Rebs take on Wetumpka Warriors, Coach Boss yells at one of his boys on the sidelines. He tells him to break every bone if he has to, but to not let Wetumpka gain an inch. It's fourth and goal with three yards to go as Wetumpka takes the field. Materhead can't believe the running back that is sent out to the field. He's nearly twice the size of their biggest man. The play starts and the running back bowls through the Rebs scoring a touchdown bringing Wetumpka up to a 13-0 lead. Coach Boss calls his team in and thinks how he refuses to lose on Homecoming game.

Days earlier, Coach recalls being at Ol' Big's funeral. He thought Ol' Big was getting old and didn't want to have anyone take care of him. He knew Ol' Big was too proud. He convinced himself that must have been the reason Ol' Big took his own life. Mayor Butterworth soon had Coach Boss called into his office. He was on life support and breathed through an oxygen mask. His wife, Miss Leddy, asked the questions upon his behalf and demanded to know how they were going to win the game without his prize nigger. Coach told them it wasn't his job to keep him happy. Leddy brought up that the blond Compson Twin was also getting nervous about their ability to win without Ol' Big and given the secrets she keeps in 'her vault', Coach Boss should be nervous. She also expressed how Sheriff Hardy wouldn't appreciate a loss either. She then threatened him to respect the mayor as without him he would be powerless. The Coach didn't concede and told her to watch her mouth for how she speaks to him and upon the mayor's behalf. He storms out and tells her that he won't lose to Wetumpka.

At halftime, the Rebs head to the locker room, down 20-3. In the stands Miss Leddy smokes a cigarette with a smug smile and realizes that Coach Boss must be scared.

In the locker room, the coach tells them he's not going to yell at them. He tells them it's up to them to be the men they think they should be.

The team exits the locker room and is pumped to fight. After they're out, Esaw asks the coach if he wasn't to send two boys at the large Wetumpka running back's knees. The coach asks if he thinks he can't coach anymore. Esaw becomes immediately defensive. Coach Boss fires Esaw and tells Materhead he's now in charge of defensive coordination.

Coach boss walks out back and is approached by Chester, the Wetumpka coach. Chester mocks him and tells him his team looks sloppy. Coach Boss reminds him that they play all four quarters where he's from and he's coming for him.

However, after 10 minutes his team started to get beat even harder. They ended up loosing 45-6. Chester rubbed it in his face as his team left victorious.

Later that night, the large running back was running his mouth at Big Chief BBQ with his Wetumpka teammates. Coach Boss emerges from the forest and tells him to quit running his mouth even though the boy towered over him. The boy told him to get loss before he gets hurt. Boss told him to come at him. When the boy did, Boss plowed through him causing the boy to lose his breath. Coach told him to never forget this moment, and to never talk about it. Or he'd send his boys to rape his momma.

Boss then retired to his home where he drank beer and held a gun closely.

Coach Boss’s Running Rebs face off against their sworn enemy from Wetumpka in the most important game in Craw County history.

Retrieved from "https://imagecomics.fandom.com/wiki/Southern_Bastards_Vol_1_13?oldid=63367"
Community content is available under CC-BY-SA unless otherwise noted.