"Here Was a Man, Part Three" 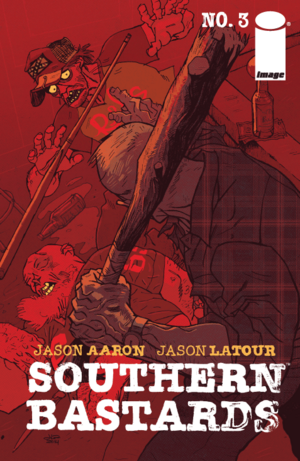 Appearing in "Here Was a Man, Part Three"

Plot Synopsis for "Here Was a Man, Part Three"

Earl Tubb recalls telling Bertrand Tubb he was leaving home to fight in Vietnam as it was the right thing to do. His father tells him he should be honest as to why he's leaving town.

In the present at Boss BBQ, Shawna is shocked when Earl walks in with his Tubb Bat. Esaw Goings and Materhead stop eating their meals. Earl demands to know where Dusty Tutwiler is and if they've killed him. When they refuse to talk, Earl beats the crap out of them. He sits down and tells Shawna that he'll be back everyday at this time until he gets answers. Tad tells Earl he has answers to all the dirty things the Coach does and Earl orders him to go home.

Outside, the Sheriff walks towards Earl to arrest him and Esaw tells him to stand down. That's not what the Coach wants and if he values his job, he'll do what the Coach says.

At the school, Esaw approaches Coach Boss. Boss tells him they've got to prepare for the game against Wetumpka, take some men and take care of the problem.

Earl decides to camp outside. He tries calling the voicemail of his friend again to tell the Voicemail Person he can't wait to leave the town.

Inside the house, Tad watches TV when the Running Rebs walk in. When Tad talks back to them, they attack Tad to send a message to Earl.

Retrieved from "https://imagecomics.fandom.com/wiki/Southern_Bastards_Vol_1_3?oldid=63364"
Community content is available under CC-BY-SA unless otherwise noted.