"Here Was a Man, Conclusion" 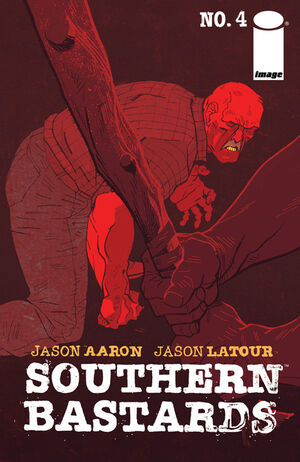 Appearing in "Here Was a Man, Conclusion"

Plot Synopsis for "Here Was a Man, Conclusion"

Earl Tubb recalls being in Vietnam.

In the present, Earl cries about Tad.[1] He was told at the hospital that Tab may never walk again. When Earl returns home and sees his tires were slashed, he thinks how they shouldn't have done that if they wanted him to leave town. He grabs his Tubb Bat and heads to Boss BBQ.

He finds Esaw Goings and Materhead waiting for him outside and they can barely believe he had the gall to show up. Sheriff tries to ask him to head home but he forges forward. He announces to the crowd that they don't have to act this way and give in to the Coach. They can stick together. He's suddenly struck in the head with a rock from the crowd. Earl began fighting his way through the kids until they were all incapacitated. He enters the building and finds Coach Boss siting inside eating. Earl tells him the Coach was never good at football as a kid. The Coach lunges at him at beats him to a bloody pulp with his own bat in front of the whole town.

Retrieved from "https://imagecomics.fandom.com/wiki/Southern_Bastards_Vol_1_4?oldid=63365"
Community content is available under CC-BY-SA unless otherwise noted.