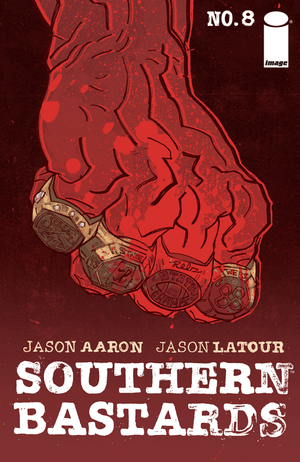 Years ago, Euless Boss headed out to the woods to ask his dad for help. Euless told him he lost everything because of him. When his dad agreed to help him, Euless pulled out a gun and shot him.

Euless brought body to Mozel. In return, Mozel made him coach. The Principal fired coach Forrester and Euless walked out onto 'his' new field. Euless told Ol' Big nothing would come between him and that field again.

In the present at a football practice, Coach Boss yells for Ol' Big who hasn't shown up on the field yet. He heads to his office and finds Big committed suicide. He wrote a letter that said, "ain't worth the blood" on his desk.

Elsewhere, Berta Tubb looks at a picture of her dad as she prepared to head home.

Retrieved from "https://imagecomics.fandom.com/wiki/Southern_Bastards_Vol_1_8?oldid=35994"
Community content is available under CC-BY-SA unless otherwise noted.