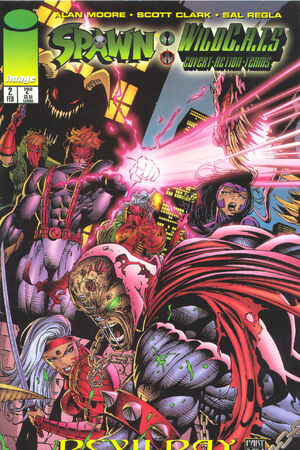 Appearing in "Devil Day, Part 2 of 4: Streets of Fire"

Plot Synopsis for "Devil Day, Part 2 of 4: Streets of Fire"

Spawn and the WildC.A.T.s travel to the future where a future version of Spawn, named the Ipsissimus, has ruled the world and made it demonic. After a scuffle with two of the Phlebiac Brothers, Vindicator and Vaporizer, the heroes meet the future Ben Santini. He's part of the opposition against the Ipsissimus and has started a new team of Black Razors, even though they are young kids. He leads them to the future WildC.A.T.S and they make a plan of action. Before too long, Troika attacks. The three members were fused together by the Ipsissimus on a whim. Void teleports them out of there and they make the journey to the inevitable battle.

Retrieved from "https://imagecomics.fandom.com/wiki/Spawn/WildC.A.T.s_Vol_1_2?oldid=50235"
Community content is available under CC-BY-SA unless otherwise noted.