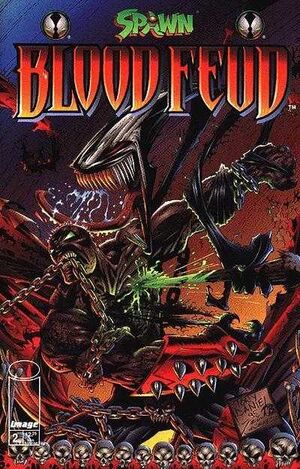 Spawn heads toward Jacob Groenfeld's apartment. He was an urban arms dealer and old CIA contact. Spawn believes he may have the missing guns from his alleyways.[1] Jacob tells Spawn he has the equipment and they talk like old friends again.

John Sansker appears on a a talk show where they discuss the menace of Spawn. The host asks if he believes he's a vampire, and Sansker skirts the question.

After the show, Sam Burke informs Sansker that there was a sighting. He tells them he's with a man named, "Sonny". He asks Mr. Sansker if Spawn is a vampire, why was blood not drained from the victims. He also asked if he thought there was a connection with the blood bank robbery the previous night. Sansker walks past Burke towards a helicopter to chase after Spawn and tells him he doesn't have time or know the answers.

As Spawn and Jacob talk, they joke about their old nicknames and Jacob reveals his nickname was "Sonny". A beating sound can be heard similar to the sounds at the murders from the previous night. Jacob slips and tells Spawn Sansker is Canadian which he shouldn't know. Spawn realizes he's been setup as Sansker bursts in through the window.

As they struggle, Spawn realizes Sansker is faster than he is. As he's about to be knocked unconscious when his suit springs to life and knocks Sansker back. As a helicoptor police arrive, Spawn takes off. Sansker begins recovering and jumps in the vehicle demanding to return back home. He tells the driver he needs to sleep during the day so he can hunt his prey at night.

Spawn struggles to take his suit off. He throws it into a treasure chest and lets it sink into the ocean.

Spawn returns home to sleep in his chair. He's awoken by his street bum friends who have stabbed a wooden stake into his heart.

Retrieved from "https://imagecomics.fandom.com/wiki/Spawn:_Blood_Feud_Vol_1_2?oldid=42861"
Community content is available under CC-BY-SA unless otherwise noted.